You are here: Home / Environmental Engineering 1 / Construction and maintenance of water distribution system

Following factors are considered for the proper construction and maintenace of water distribution system. 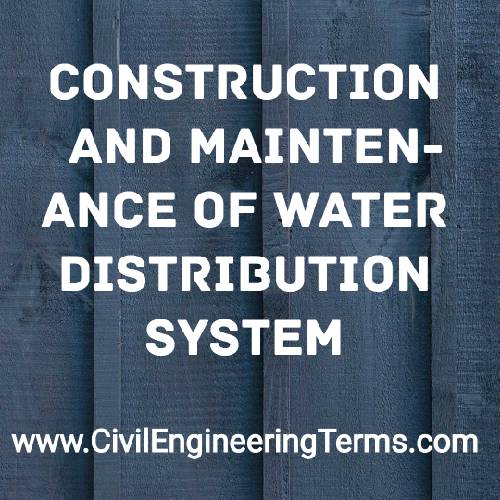 Excavation and back filling in water distribution system

Following points should be kept in mind while pipe handling and laying in water distribution system.

Occasionally pipe lines must run through streams. So it is necessary to place the pipes under water. Generally cast iron pipes are used for this purpose. To lay a pipe it is good to dig out a trench in the channel bottom. The channel will silt up.

Silt up is to become choked or obstructed with silt.

It gives the protection. A dredged bottom will be rather irregular and it may be necessary to furnish a suitable foundation.

Dredge is a machine for removing earth usually by buckets on an endless chain or a suction tube.

The use of highly flexible joints may make blocking un necessary.

If summits and valleys are necessary in the water distribution system, then it is suitable to place hydrants near them.

It will allow the escape of air at proper time intervals. And if hydrant is placed near valleys then sediments will be collected there and it will help in blowing out of sediments.

In fact it is placed between sidewalk and kerb.

Kerb is an edging made of concrete built along a street to form part of a gutter.

Or hydrant is placed between sidewalk and property line.

Placing the hydrants on the base of concrete prevents setting the branch from a main to hydrant. To prevent the hydrant from being displaced by water pressure, is should be braced on the side opposite to the branch entrance.

Valves should be properly inspected and maintained regularly.

The main defects in the valves are

A valve may become unoperatable through corrosion. Pouring kerosene oil or diluted lubricating oil, will lubricate the joint between the stem and packing. Corrosion can be overcome by carefully operating the gate up and down and allowing increased velocity of water to sweep out the sediments.

Closure of valves occurs due to corrosion or silting. It can be removed by pouring kerosene or lubricating oil down the valve key and by allowing increased velocity of water.

In the process of handling and placing of pipes, pollution is not created.

The mains may become polluted

The following steps are involved in disinfection

Undiscovered breaks in mains, unauthorized users of water and unmetered customers which are the cause of wasting water are discovered by waste water surveys.

These surveys are carried on by means of pitometers which are places in the mains when flow is to be measured.

Instead of using pitometers, it is possible to close all the valves on the mains leading into the district and supply water through a hose connecting two hydrants and with a large water meter in the hose line,

Close all the valves on the mains, except the one which is entering the district. The flow is measured in the one main at night when domestic use is low. So the location of loss can be estimated.

Further restriction of the district by closing other valves and noting upon the inflow rate in the supply mains will locate leakage very closely.

Water surveys save enormous amounts of water. These surveys make it possible to account for at least 85% of the output in metered cities.

At the lower end of the pipe to be cleaned, the pipe is broken. A 45 degree branch is used to bring the end to the street surface where it is left opened. A special sleeve is inserted at the upper end after a small float with an attached cable is inseted. The upper valve is opened and the small float passes through it. A large cable is then drawn through and scrapper is inserted at the special sleeve. The water pressure is put on and the scrapper is pulled through by means of the cable. In this way the dislodged clogging matter escape from the open end with the flow of water. Recleaning may be necessary after 5 or 6 years.

It is difficult to locate a leak exactly. Various investigations methods may be applied to our ease.

Presence of melted ice or green grass during a drought will indicate a leak.

Sometimes it is necessary to locate the lost underground mains and services. Various electrical magnetic devices are used for discovering buried metallic structures. They are particularly useful when there are no other interfering conduits or pipes. These electrical devices may be of little value in the streets or large cities where underground pipes are numerous.