You are here: Home / Fluid Mechanics 2 / Definition of Drag and lift | Pressure on a body immersed in a liquid

When there is relative motion between the body and the fluid and the body is completely immersed in a homogeneous fluid , then the body may be subjected to two forces.

If the force is parallel to the motion then it is called drag.

The drag force on a submerged body can be viewed as having two components.

If the force is normal to the relative motion of the body and the fluid in a homogeneous fluid, then it is called lift force.

Pressure on a body immersed in a moving liquid

When a solid body is held in the path of a moving fluid and is completely immersed in it, the body will be subjected to some pressure or force. Conversely, if a body is moving with a uniform velocity through a fluid, then fluid will exert some resistance to moving body, or the body has to exert some force to maintain steady movement.

It has been experimentally found that when a plate is held at some angle with the direction of the flow, the streamlines of the liquid gets deflected. 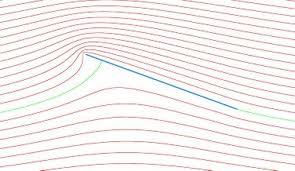 When the plate is held at some angle, it is subjected to some pressure. As this pressure is acting at right angle to the plate. So it will have two components.