To fully understand the term Fluid mechanics we must first know what is Fluid and what is Mechanics. 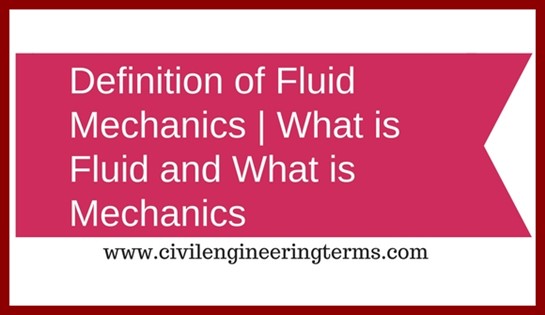 The substances which have the tendency to flow or to move are known as Fluid.

Mechanics is the mechanism by which a substance behave.

Now You can easily understand the term Fluid Mechanics by simply considering above terms.

Fluid Mechanics is the branch of Engineering which deals with the study of mechanism related to fluids.

It may be defined as the mechanics of fluids including water.

Fluid mechanics is further divided into many sub categories. The study of fluids that are in-compressible such as liquids and gases, at low speeds is usually referred to as hydrodynamics. There is also a sub category of hydrodynamics which is hydraulics. Hydraulics deals with the liquid flow in pipes and open channels such as canals.